The absurdities of retail...

May 31, 2015
I don't know if I told you all or not, but I had a brief side gig as a sales associate for a plus-size retailer. I figured the 40% discount would help me economically update my wardrobe, while also bringing in a few extra bucks a month.

Granted, I ended up spending more money once I started my brief tenure because "It's on sale and I'll never get this dress for this cheap!"


Yeah, kinda shot myself in the foot with that one.

Anyway. If you've ever worked in retail for any length of time, you're probably aware that managers can be a little… What's a delicate way to put this… Hmmm… Crazy?

The assistant manager was great- she had a normal outlook on life and recognized that a retail job is just a job and we all need to calm down. It's not like the world was going to end if the shirts weren't perfectly folded to death.

The store manager on the other hand… She's only ever had retail jobs, so she takes them waayyyy too seriously. The company would set these ridiculous credit card application goals that no mere mortal could make (yet the store manager could, only because she.did.nothing.else. But I digress…), and then the store manager would actually credit shame us if we didn't make the goals.

There was actually this absurd list she'd print out of all the credits that were gained during the last week or 2, and then she'd scribble "Zero Club" on the side, and write all the names of those who didn't get credits underneath. That would usually be followed by some "motivating" speech that went something along the lines of "If we all had gotten just ONE credit per SHIFT, we would have made our GOAL! How are YOU going to turn it around??!!!"

I wish I could say the emphasis was mine. It's not. She did that. In red sharpie.
Please note that she would not post the Zero Club list if she didn't get any credits. Because then she doesn't look perfect, and we can't have that. ;-)

One of the last straws upon my camel's back that made me realize it was time to leave was the most ridiculous.


It was the thermostat.

You know, the little device that changes the temp of an area??

Someone was changing the temperature of the thermostat, and the store manager had a bona fide hissy fit over it. She got on the walky talky and was blasting everyone in the store for changing the thermostat and how it's so hot and blah blah blah. As she was sitting in the back room, the rest of us out front looked at each other like "Uhhhh….??"

Sensing way too much tension, and having the tendency to make jokes at inappropriate times, I piped up with "…I don't even know where the thermostat is soooo..." One of the other girls looked at me and started laughing, and said she didn't know where it was either.

But, here's my favorite part, because of course this didn't stop there. 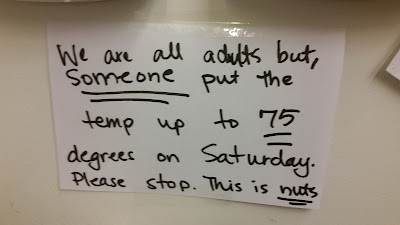 We're all adults, yet we're throwing a temper tantrum because of the thermostat? And we're claiming that people aren't working hard enough if they're cold…?

I fully commend everyone that works 2 jobs- you do what you gotta do. I decided that enough was enough, and I was probably spending enough money as-is on clothes, so I left shortly after. Granted, my day job was legitimately getting crazy, but the aforementioned events didn't make me want to stay and try to suck it up. Nooo regrets.

Solidarity to my homies still working retail and the homies working 2 jobs. Fight the good fight!