We lost our dog

February 15, 2016
OK not really, I wouldn't be blogging if we lost our dog. I'd be sobbing into a pint of ice cream while laying on the floor gnashing my teeth.

What I meant to say was that we lost the WEIGHT of our dog between the 2 of us. I know, sneaky. That was mean. #yolonoregrets #Icantbelieveisaidyolo #iapologizeforsayingyolo

Anyway. Today is "weigh-in Monday" a.k.a. "gird your loins and hope for the best Monday". Years of diets have made me fairly pessimistic with weigh-in days, so I always fear the worst when it comes time to step on the scale. Instead, I lost 2 lbs this week! Which brought my total weight loss up to 15.5!!!

Even more impressive? My darling Bearded Wonder. Now, in case you weren't aware, men sneeze and lose 5 lbs. They blink rapidly and lose 8 lbs. It's just a cruel and scientific fact.

I'm so proud of him. Seriously. I mean naturally I hate him a little bit right now because of the raging jealousy, BUT. I'm so proud and grateful to be doing this with him. I don't think either of us would have been as successful without each other (you know, until he sneezed anyway ;)).

We both have more energy, we sleep better, we don't ever feel bloated and gross... You guys, I hate to sound like I'm drinking the kool-aid, except I'm going to. I drank the whole pitcher. This program really is awesome. We've already decided we'll just keep up with the clean eating and portion control even after we stop the program. It just makes sense.

Also, I'm thinking of signing up as a Beachbody coach. I'm obsessed with this program and we have some ridiculously awesome results. Case and point: 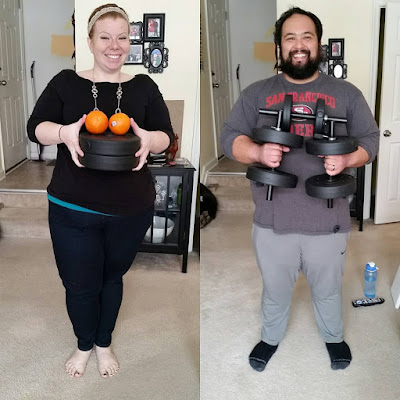 We're each holding the amount of weight we've lost. =) I guess we could've held up our dog to get the same affect. =P

As for food, favorites as of late are...
Asian turkey burgers
Turkey meatballs
Spaghetti squash with no-sugar-added pasta sauce
Roast chicken that we cut up and eat throughout the week
Parmesan puffs
Buffalo Chicken Dip (O.M.GEEEEEE THIS IS STUPID GOOD.)